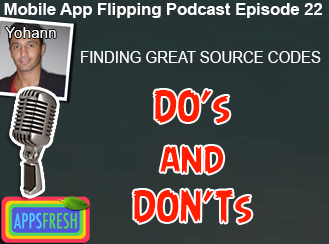 Also learn about the Do’s and Don’ts when purchasing app source codes on different marketplaces.

Yohann is also talking about the new courses that comes with the source codes on AppsFresh, made for kids or for anyone completely new to the mobile app development industry.

Check out the 2048 course + source code on AppsFresh.com

Let’s dive right into the tournament. If you go to appsfresh.com/tournament, you will be able to see that as of we speak, we’re approaching the end of the reskinning tournament. So what is or what was the reskinning tournament because you can no longer register anymore obviously but, there are hundreds of participants already. The tournament is about us, appsfresh.com, who provide you a source code, it was like for $19, you get a source code of a game called “Egg Fall”. So I don’t know if you guys are familiar with “Egg Fall”, but it’s technically very similar to “Flappy Fall” which is items falling from the sky and in your hands you have some kind of a basket and you need to catch those eggs. So technically any items can fall from the sky and you need to catch them before they touch the floor. Obviously, as time goes by, items keep falling faster, so it gets harder and harder and you get 1 point every time you catch one of these items.

Now, this source code came with lots of graphic pack images, many of them were just drag and drop. We tried to make it as easy as possible for those who do not have time to do reskinning. Even though it’s a tournament and you’re supposed to show off your skills, by creating your own graphics. Many of you already finished their apps and are already in the App Store. You can take a look at what people have been doing if you go to appsfresh.com/tournament you will see the links there or you can go to our blog and look for the post “what our participants have been doing” or something like that. So we gave away the graphic packs which made it easier for people who didn’t have time for their own graphics and there are many other ways to come out of the app store and reach the top chart without having great graphics. What really matters also are the graphic icon, the screenshots you put with the iTunes Connect settings, and obviously the app name needs to be really catchy, and the keywords for ASO also, definitely are a big plus. So we try to make it as easy as possible. Many of you came out with their own graphics and some of you did even better, you took the code and modified it. By modifying it, you kept the mechanics, because the purpose is to still use the same mechanics. They basically are falling items coming downwards and catching them before they touch the ground. Many of you change the mechanics by adding an item that comes from the sky. So instead of having the same items coming over and over again, you had different items. Some also went one step above and added items you were supposed to catch and some items you should not catch, and if you do, you lose.

So definitely, you guys should check it out, we have people from all over world participating. You want a country, you name it. There’s definitely no borders when it comes to the app reskinning world. It’s just one big community.

Now I wanna talk about source codes out there that are for sale on different marketplaces. The reason why I wanna talk about it is that there are pros and cons on different platforms and there are some tricks you guys should be avoiding. I want you to be able to those great source codes from those that are not so good. First of all, I wanna talk about clones of mechanics versus clones of graphics. So whenever you’re looking for a source code, look for the game mechanics over the graphics. What I mean by that is that many of the source codes out there have the exact same graphics as the original game. So you may say, ok that’s great, it comes with the exact same graphics as the original game, but guess what?
First of all, there are some legal reasons here and I don’t even know why some marketplaces accept source codes that are using the graphics from the original game. That makes no sense and I’m sure that’s an infringement of copyrights right here, because you’re re-using the graphics from a game. Ok it’s for a different purpose but you’re definitely re-using them for something that’s gonna be put on the app store again.

The reason you don’t wanna buy these source codes is because it’s using the same graphics and that’s gonna slow you down. Why? For two reasons. One, Apple can definitely stop and reject your game because it says that your graphics are similar to other games and can ask you if you have the copyrights to use these. So that’s one, but obviously that’s not something you’re gonna see when you buy the code, you will see that later when your app is already on the way to the App Store. That’s gonna make you waste time right here. Second reason you don’t wanna do that is for copyright infringements and you’re gonna have to change the graphics. In the sense that you can not have the same graphics as the original game, so technically you will have to come up with your own graphics. What you need to do is to look for games that have the same game mechanics as the original game, however, you want different graphics. By that, I mean not extremely different graphics, let’s say I take one of our best sellers “Timberman”, our “Timberman” app template. We have our own “Timbermen” within the game, we provide 3 Timbermen, one that looks like a caucasian guy with a beard, another guy who looks like Frankenstein,  green alien looking guy and a third one that looks like a dark-skin guy. These characters were totally different than the original game, you could re-use them. You have no problem with that, so that’s gonna speed up your reskinning process. You just don’t have the source code, you buy more than that. You actually buy the source codes and graphics. This saves you a lot of time and money because you don’t have to start your graphics from scratch. Just use these as the base for your reskinning theme.

Something else you wanna be looking for is…